Plants vs. Zombies, a family game

I'm a little surprised to be recommending a tower defense game about the undead for 4-year-olds, but Plants vs. Zombies (from PopCap, makers of Bejeweled and Peggle) is really very special.

For the uninitiated, tower defense games are generally pretty stressful. You have to defend your base against waves and waves of enemies by tactically arming the corridor they use to approach. These attacking hordes often escalate pretty quickly from seemingly manageable to completely flippin' overwhelming, and only the perfect balance of slow-and-steady strategic thinking with cool-as-a-cucumber tactical dexterity will prevail. Stressful, frustrating gaming experiences are not generally recommendable either for my 4-year-old or myself, or really for anybody but masochists.

Then there's the whole zombie angle. I try to shelter my children as long as possible from the mature themes in much of today's entertainment. I don't really want to be explaining what zombies are and why they want to attack our house and eat our brains. (Or more subtly, that zombies don't actually exist...yet!) Call me overprotective or old-fashioned; I just think my boys will have decades to enjoy zombie-related entertainment without my rushing them into it.

That's why I'm a little late to the party on this whole Plants vs. Zombies thing. I avoided it for years because of the tower defense angle. Then, right before PopCap put the game on sale and donated all proceeds to tsunami relief efforts in Japan (I lament not the price I paid, but that my money didn't go to the cause), I decided to download it on iPhone. And downloading anything on iPhone for myself means I'm also downloading it for Alex, my son. But I wasn't too concerned; I knew the game's cartoony style wasn't scary, and I really didn't expect him to be skilled enough to play it.

I was surprised, therefore, when it quickly became his favorite game. Sure, PvZ has PopCap's signature balance and pacing, making the game completely accessible (and highly addictive) to me. But Alex didn't seem to care much about actually playing it. What captured his imagination and attention were the game's artwork, animations, and unexpectedly lovable cast of characters. I had no idea zombies could have such heartwarming backstories, meaningful behavior patterns, memorable voices. Take Flag Zombie, who carries a flag with a brain on it, while chanting "brains." Or Jack-in-the-Box Zombie, who shivers "not because he's cold, but because he's crazy" (according to his in-game bio). Before Plants vs. Zombies, I had no idea the shambling undead could be so...cute.

So though Alex isn't particularly skilled at the game, he doesn't need to be. He just loves the PvZ experience. He has his favorite plants -- the black mushroom who is (in Alex's words) "really, really angry!" or the little potato "who doesn't shoot anything but just explodes...you know he's ready because his red light flashes." Or the purple venus fly trap "because he stays." (Alex's placement of plants leaves something to be desired, meaning most of his plants get eaten pretty quickly, so the fact that he can count on the venus fly trap to eat a zombie whole and survive for a few more paces means the world to Alex.) And those fabulous pea shooters, which he loves because... "they shoot peas." (Ah, the simplicity of 4-year-olds....) He even loves experiencing defeat and hearing his character scream "NOOOOOOO!" as the words "ZOMBIES ATE YOUR BRAINS!" flash on the screen. He can't read, but he once proudly announced to me that the words say, "You losed!"

But PvZ is more than just an accidental kiddie fave. I'm calling it a family game, because it's genuinely absorbed our entire family. With our various iPhones and iPads, I've found we can easily while away an hour or more each playing the game independently. Now, this isn't what I call healthy (hey, even quality screen time needs to be moderated), so as often as possible, either my husband or I will play the game with Alex, which he really, really loves. And when we can't play Plants vs. Zombies?

We talk about Plants vs. Zombies. (And frankly, there's no shortage of discussion topics.)

"Hey Mom, you know that black mushroom? He's a really angry mushroom. He explodes. He leaves a little hole in the ground. He's my favorite."
"Mom, why does the football zombie run really really fast?"
"If the zombies reach your house, it's OK if you have a lawnmower there. The lawnmower will get those guys."
"Remember that time I had FIVE pea shooters in a row?"

Our entire dinner conversation could revolve around PvZ if we wanted. We love to randomly yell "NOOOOOOOOO!" or pretend to eat each other's brains with the telltale "chomp chomp chomp" sound. (Even the baby loves this part.) And when one of us is particularly grumpy, making what we call the Zombie Garlic Face -- that scrunched up expression of disgust the zombies make when they smell garlic -- never fails to lighten the mood. 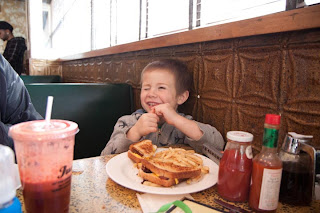 Occasionally I'll even find my husband and I get drawn into legitimately discussing tactics during conversations started by Alex.

Me: "I wonder what would happen if you put an entire row of garlic. What would the zombies do then?"
Nick: "You'd probably need at least two rows, but it seems like it might be pretty effective."
Me: "But how would the zombies get killed?"
Nick: "I guess you'd need a line of offensive plants on the other side of the garlic."
Me: "I wonder how long that would take to set up. Would you have enough time to get all the garlics planted?"
and so on.

I'd chock it up to our simply being a family of hardcore gamers, except that's not even true anymore. I've barely touched my consoles in a year, and even my husband practically had to hire a babysitter when he wanted to finish Assassin's Creed II. Yet there we are on vacation at a diner in New York, contemplating not the blue whale at the American Museum of Natural History, the three turtles we saw in the pond in Central Park, or the Cannonball Adderley tune we heard a musician playing the subway, but how Newspaper Zombie gets really upset when you shoot through his crossword puzzle.

A lot of the time, I feel bad about playing casual games. They're super-addictive and can eat up hours, days, weeks of your life without tangibly giving a whole lot back. Sure you have a few moments of brainless relaxation and your high score on a leaderboard, but generally you're left wondering where the time went, a vague sense of guilt haunting you. Perhaps that's another reason I avoided Plants vs. Zombies for so long. But now that I have it, I'm genuinely grateful to PopCap. This brilliant game has given our family an elusive, precious commodity: quality time together.
Posted by Jennifer at 4:34 PM 2 comments: