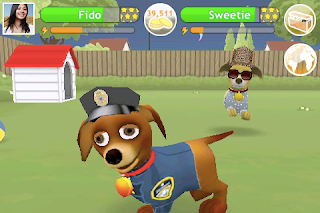 Playing games with Alex is getting more and more fun the more he levels up. With each passing month, he gains points in dexterity (better small motor skills to press the buttons when he actually wants to), cunning (to help him figure out the right button to press), willpower (to keep trying even after things don't work the first try), and constitution (to help him know when to ask for help with a certain task). (Clearly, I have Dragon Age on the brain.)

The one that I totally didn't expect him to love, however, is ngmoco's Touch Pets: Dogs. It's a little virtual pet game for iPhone that is really quite simple and a direct rip-off -- and vast improvement on -- Nintendogs for the DS. You visit the dog daily to feed him and give him water, take him out to the yard for exercise, care for his hygiene, change him into cute outfits, etc. Alex LOVES all these activities. He seems, especially, to relate to the dog's need to be let outside every day to poop. That's always his first priority after booting up the game, and he is very conscientious about cleaning up the poop. He also loves feeding the dog and giving him water, and washing and brushing him. It's so much fun to see how such a tiny human, who can do so few things on his own, can understand and use the intuitive interface (I credit both ngmoco and the iPhone itself--and, of course, my brilliant child).

The cutest part for me, though, is what Alex calls the game. He asks for my phone, then tells me, "Let's play Wii Dog." When we're done with all the tasks in Touch Pets, he says, "Let's play a different Wii." It's amazing -- to this child, "Wii" = "game." Even though I should probably correct him (for the sake both of literacy and of fairness to the other consoles ;), I find myself just letting this one slide and enjoying this simple time when one child's entire view of video games is formed by his early life experiences with Wii.
Posted by Jennifer at 9:45 AM 4 comments: