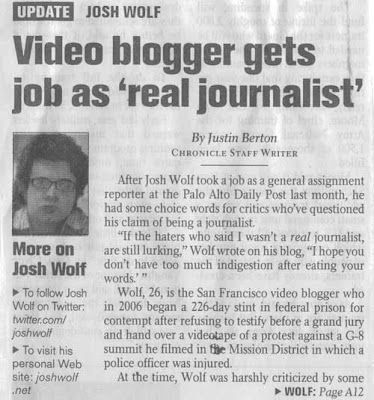 This was an actual front-page story a few months ago. It reads like filler text some editor wrote late at night as a joke that accidentally ended up making it through the edit process and getting printed. Frankly, that's the only excuse for this horribly written story getting published at all, much less on Page 1 of a major metropolitan newspaper.

And if that is the reason this story ended up where it did, then it is a perfect example of why we had a rule at EGM that filler text had to be all XXXXXXXXs. This was both extra work and decidedly unfun, eliminating as it did the opportunity for snarky editors to fill copy in as a joke that was to be replaced later with the real text. But at least it made it completely obvious to any editor reading the page, at any step in the process, what was real text and what still needed to be filled in.

The other possible explanation, which I suspect is the real one -- that this is a fair story to run on Page 1 because of its legitimately local appeal -- is really no more mitigating. The story is so badly written that readers have virtually no reason why they should even keep reading past the jump, much less look up the guy's blog or follow him on Twitter for pete's sake. I mean I subscribe to the damn Chronicle, read it fairly regularly, and still had completely forgotten who this person was. Why the hell should I care that he's now a "real journalist?" Especially when the story I'm reading, ostensibly written by a "real journalist," is so clearly an example of...bad journalism. It's so meta it's giving me a headache to think about.

I really hate their headlines. You can find examples of their weak headline writing every day, but today's example illustrates a crucial rule I learned from Merv Block (a fabulous writing teacher I had at Columbia Journalism School): Don't start with a question or quotation. Now, Merv Block is a pro at writing for broadcast, but in newspaper writing, the headline is basically the same as the first line of a broadcast news story. So to ask such an inane question as the headline is basically asking anyone who answers no to just move on and quit reading.

And I kinda suspect a LOT of people answered no to that question.

Now, obviously I support the Chronicle's fundamental mission or else I wouldn't subscribe. But the more bad headlines and crappy stories I read, the harder it gets to feel bad about the sad state of newspaper publishing in San Francisco. While I'm criticizing the Chron, though, I will say that I really like the local columnists, and if the paper is going to survive at all, I'd think it'll do so by providing great local coverage -- stories that are better reported and more thoughtful than what you can get anywhere else.
Posted by Jennifer at 6:00 PM

It's not just the San Francisco Chronicle. It seems more like newspaper journalism in general. My family has stopped subscribing to the local paper for years because of the lack of quality reporting.

That article reads like an angry message board post and it made me laugh on the inside...

Why does that sound familiar...

Hey, If you can't complain on your own blog where can you complain? haha...

Jennifer, I totally agree. While I might still be in high school reporting for the school newspaper, I can really tell that the article is an example of bad journalism. How did that article end up on PAGE 1!? Does it really deserve a page at all? The Chronicle needs to reconsider about what they are covering in their newspaper. Like the New York Times slogan states, the Chronicle needs to only "Print the news that's fit to print".