We've decided to get fruits and vegetables delivered to us via a CSA (which stands for community supported agriculture) service. They provide home delivery of locally sourced fruits and vegetables. The selection in the Bay Area is pretty overwhelming--you have Capay Farm Fresh to You, Spud, Two Small Farms, and the one we chose Planet Organics, among others. They all seem to have pros and cons, but we chose that one mostly because I have a friend who already uses them and they are very happy with the selection. Plus, he always brings in awesome leftovers with an inspiring assortment of seasonal veggies. He and his girlfriend basically cook based on what shows up in the weekly box. So, we decided, along with our neighbors, to try it out and split the ingredients (since we're both on a budget and worried about ordering too much, then not using the stuff and having to toss it). We also figured it was a good time, since my mother-in-law is visiting for a month, and she's a great cook, and a vegetarian one to boot! Will report back on how it turns out!
Posted by Jennifer at 10:04 AM 2 comments: 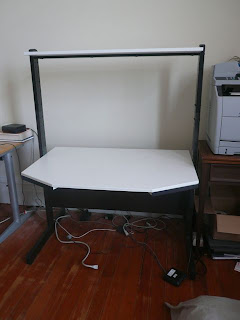 My Ikea Jerker desk is officially gone, via Craigslist, for free, to a woman who seemed very excited to receive it and came over to pick it up within 20 minutes of the posting. I'm a little nervous that she won't be able to assemble it without the instructions, but Nick tells me they'll figure it out. In searching for some pictures online to send her for guidance, I happened upon this Ikea Jerker Tribute site.

It warmed my heart to see that others share my affection for this desk that so many, including most if not all of my former and current housemates, have viewed as "hideous." I bought the desk in 1997, before the Bay Area even had Ikea. My brother imported it for me from the Southern California store. Assembling it by myself in my new apartment was one of my first realizations that I was on my own in this world, and that the road ahead wouldn't always be an easy one.

Sitting at my Jerker, I played many, many computer games. I wrote a novella and a lot of other stuff that may never see the light of day. I wrote a lot of stuff that did see the light of day. I listened to countless phone messages on the answering machine, stored conveniently on one of the swivel shelves. I watched my little TV that fit perfectly on the upper shelf. I applied for many a job from it during my period of unemployment. My cats sat on its various shelves for hours on end. And I disassembled and reassembled it at least six times that I can remember. (But it feels like more.)

It's fair to say I loved that desk, even though I saw its deficiencies. Namely, it has no internal storage, so the cables for all your stuff are always visible. And though you can adjust the height of all the shelves to your liking, doing so is a ton of work, so you usually leave it the way you set it up the first time out of laziness. What made this worse was that in our last move, we lost most of the essential screws, so three of the four shelves stood unattached, cluttering up our office for the last few years. I suppose I could have gone to a hardware store and gotten replacement screws (I couldn't find them at Ikea despite several attempts; I think they've redesigned the new Jerker to use different ones). 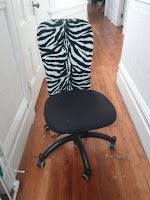 The truth is, though, that I was outgrowing the Jerker. It never really fit well in our home office, and a large desk like that no longer served my purposes. Plus, Nick hated the Jerker, and he eventually convinced me it was time to let the thing go. (I did fight though....) But hearing how happy this woman was to find out that it was still available, and the fact that she also took the zebra print chair that matched the desk perfectly, made it easier for me to say goodbye.

I just hope she figures out how to assemble it without the instructions.
Posted by Jennifer at 9:15 PM 2 comments:

I totally spotted a former America's Next Top Model contestant (Chantal) on a the cover of 7X7 magazine at Mollie Stone's the other day. I have to alert my favorite blogger, FourFour! I'd have posted a jpg but I'm way too tired and there's not a good one available on the site :(
Posted by Jennifer at 6:15 PM 1 comment: