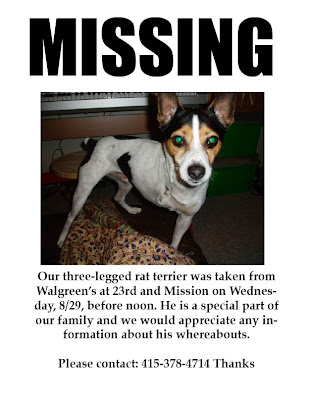 Somebody walked off with my mom's dog today while she was picking up a prescription at Walgreen's. This is so tragic and sad... Teddy was a part of our family, and he was Alex's best friend. He was a three-legged rat terrier who loved to eat food that Alex threw on the floor. He liked chasing Poupon, and he was just getting comfortable in his new home here in the Mission.

We posted these flyers around the neighborhood tonight, as well as filing reports with the police and the SPCA/Animal Care. It's hard not to have hope, even though the homeless guy who watched the whole thing happen told my mom she'd probably never see Teddy again. Without Teddy, the house feels empty even with three adults, a baby, and two cats.

UPDATE:
The homeless guy may understand hopelessness, but it turns out, there was a reason I didn't want to give up: Teddy was turned into the SF Animal Shelter, and since we had reported him missing, they recognized him and called us! He's a little shaken up, but he's home safe and sound! We're so grateful. Alex laughed in his carseat all the way home (Teddy keeps him company in the backseat). We're all feeling very relieved.
Posted by Jennifer at 10:38 PM 5 comments:

Back in my MTV days, we loved to have what we called "sightings." A sighting was when you saw, say, Iggy Pop in the elevator on your way back from lunch. At 1515 Broadway, the 52-story building in Times Square where MTV is headquartered, sightings most often happened in the elevators, because people spend a lot of time moving from floor to floor and elevator bank to elevator bank.

Over time, the term "sighting" gained other meanings. For example, if you worked on the 41st floor, and you saw a cute guy from 23 up on 41, that became a sighting. Meeting your friend for lunch at the Lodge (the somewhat infamous Viacom corporate cafeteria, located on 8) could be a sighting, and you would definitely have the opportunity for sightings on your way to and from lunch. Even going out on a Friday, running into a friend at a bar, was a sighting. Seeing anyone out of their "natural" environment was a huge sighting, celebrity or not.

Well, I had an exciting sighting the other day, but of the distinctly Silicon-Valley-internet-blogosphere-cum-reality kind. Shopping in Trader Joe's (of course), we were checking out. I looked over and saw a familiar face...wait, who...hm...OH! It's Kokochi! That's Tesla's mom!

The funny thing here is, I'd never actually met either Kokochi (whose real name is Mie), her daughter, or her husband, Dav. But I know them from her blog, which I found once on SFist. This was back when we were both pregnant, and I was very interested in reading about other people having babies in SF. I've really enjoyed reading about their adventures over the past year or so, especially as Tesla is a few months older than Alex, so I get a glimpse of what I can expect next, developmentally and life-wise.

I introduced myself (and Nick and Alex) a bit hesitantly. But she was completely friendly and mostly unfazed... Of course, she blogged about it too. She wrote in her blog that she had wanted to take a pic, and now I wish she had. First, it would have made our little encounter part of Kokochi, which would have been fun. But also, it would have made it an even more MAJOR sighting!
Posted by Jennifer at 12:17 PM No comments:

And since I'm catching up, let me mention that the BBC Footballers Wive$ finale was a terrible letdown. I'd been saving it on TiVo until I had time to really focus on it. I thought they would be bringing back lots of old faces and really doing the series justice. Not only did they not do this, they also managed to leave most of the major characters' stories hanging in these depressing, half-baked fizzles that at best could be interpreted as little morality tales. All the characters ended up, as Tutu put it, in "their own personal hells." Um, sorry...the show picked a weird time to suddenly introduce morality. Up until then, it had simply been a silly, over-the-top soap opera. It should have ended that way--with characters going out in luxurious, preposterous fantasy. The downfall of that show was Amber. They should never have let anyone bump Tanya Turner (played so stupendously by Zoe Lucker, whom I want to see more of in something, anything!) off center-stage. That's when the show started to lose it. The last season was pathetic--not even the return of Tanya/Zoe and Joan Collins could save it. There was a brief hint of touching elegy in the finale, when Tanya is reading the tabloid story about "the Curse of Earl's Park," but, man, was that a lazy way to cover the show's history without doing any real writing or production work. I guess they were just putting it out of its misery.
Posted by Jennifer at 3:02 PM No comments:

I have had all sorts of posts brewing lately, but my blog was mysteriously locked by Blogger for suspicions of being a spam blog! I can't quite see how they might think my blog was purely for spam purposes. They had it locked for about a week, and I couldn't post until a human being checked it out to determine that it was an innocent blog, wrongly accused. (And someone at Blogger needs to look into their spam-detecting code because this is one false positive I can't quite comprehend.)
Posted by Jennifer at 2:59 PM No comments:

The publishing company I work for has a web site that creates a weekly video podcast called The 1UP Show. The editors are featured prominently on the show, talking about games and interviewing developers. I've appeared on the show several times, and I'll be honest that I'm usually pretty obsessive about slathering make-up all over my face before I consider myself ready for my "close-ups." I'm the same way with my photograph that appears monthly in the print magazine. I ask the photographer for take after take after take before I feel comfortable that we've got something usable. Then I beg our Art Director to adjust the color to make my complexion look smooth, my eyes sparkling, my teeth white. (It worked for Faith Hill, right?) The results aren't magnificent, but they make me feel better. I would definitely have called myself "high-maintenance."

Until recently. They wanted to shoot a segment on an upcoming game called Mass Effect, which I'm pretty knowledgeable about and excited for. I forgot all about it until 15 minutes beforehand, but that's not unusual. I keep a small make-up bag at work just for these occasions, and I usually pop into the bathroom to put my face on--nothing elaborate, just a little color on my lips and cheeks and some eyeliner to keep the sickly pall to a minimum. But this time I was too busy, too tired, and too indifferent to take that extra 5 minutes to do this. I figured, hey, what difference does it make? Plus, I thought, Kathleen (my coworker who produces the show) never puts makeup on for the show and she always looks great! And who watches these things anyway? It's just the Internet--who cares?

Then I find out that the video was linked to from a popular web site. And it got over a million views in, like, a matter of hours or something. And all the gamers in my life have been coming out of the woodwork to tell me they saw me! (This is the first I've heard from some of them in years....)

Now, I'm happy that the video did well. But did it have to be the first time I didn't wear make-up?
Posted by Jennifer at 3:31 PM 1 comment:

It's approaching the end of World Breastfeeding Week, and Andi from Mama Knows Breast picked my recent post, Business Trips While Breastfeeding, for her contest! She's sending me a copy of her book, Mama Knows Breast: A Beginner's Guide to Breastfeeding. I'm definitely not a beginner anymore, but I'm eager to check it out (and, I hope, pass it along to the next woman I know who's planning on breastfeeding)!

Also, I thought I'd take this opportunity to mention my Flickr Nursing In Public group in case anyone's visiting from Andi's blog. Join up!
Posted by Jennifer at 1:23 PM 2 comments: