I'm a believer! When my mom was visiting, she helped me get motivated to clean out the closet in our home office (and soon-to-be guest room). This was what I call a Poltergeist closet—the vortex that sucks in all earthly possessions, the black hole into which everything and anything can be jettisoned, the tornado that bleeds disorder into the areas immediately surrounding it: 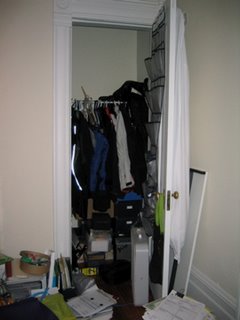 Poltergeist closets are scary, and this one was causing the rest of the room to idle in chaos. See, I couldn't organize other parts until I knew what that closet was really capable of holding in a logical, reasonable manner.

We'd long known what had to be done but had had such a tough time getting started on our own. This is where Tutu came to the rescue, as she's known to do. She helped measure the closet, accompanied me to the Container Store, helped make the nitty-gritty shelving decisions, and encouraged me to pull the trigger and spend the money (which is always my biggest stumbling block). She then cleared out the existing crap while I was at work one day, and she even found our hacksaw to remove the bar that had been there. She probably would have finished the job herself except for these pesky wood panels that had to be removed first. She wisely recognized that, as the job involved pulling plaster off walls, it was one that only the man of the house should do... 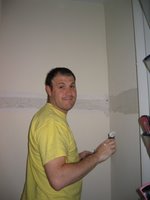 ...and though Nick makes it look easy, it was actually a lot of work, as it involved consulting our contractor neighbor for tips, ripping out chunks of wall, re-plastering them, drying/sanding, etc. But once that wood came off and the walls were smooth, the installation of the Elfa shelves was truly as simple as it was touted to be. And, seemingly "like that!", the Poltergeist closet has been quieted, replaced by this lovely safe harbor of labelled, organized office-supply tranquility. 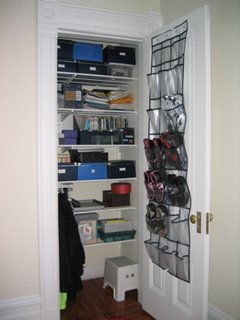 Before and After pictures are so satisfying!
Posted by Jennifer at 4:58 PM

You'll definitely be casually leaving that door open next time you have visitors...

i love the before and after pics. i need to do more of that in my house.

I'm so impressed! May I borrow your mom?