I think I learned how not to be a Mean Girl in 7th grade, and I'm pretty sure I haven't been one since then. I was in school at E.A. Hall, and I had a big group of friends--Joy, Laura, Tiffany, Cathy, Desiree, Rhoxanne, Chantell, Alicia, Yarrow, Marlene... We ate lunch together every day at one particular bench. We had almost all the same classes, and we always sat together, passed notes to each other, chose each other for group projects, and so on. We invited each other to our slumber parties, hung out at each other's houses after school, signed each other's yearbooks (and those of us who worked on the yearbook even put each other's pictures in prominent places). We may not have been the popular girls, but it didn't matter. We'd de facto declared ourselves popular within our own big group.

And then one day, there was a big fight. I can't even remember now what caused the rift. I probably have the details written in my diary, but all I know is that one day I came to school and instead of having a big group of friends, I was the rebel leader of a faction at war. I had Desiree, Alicia, Chantell, Rhoxanne, and Yarrow firmly on my side. Joy and Laura were heading the other group, with Tiffany and Marlene. Cathy, who was sick the day of the initial conflagration, was sort of stuck in the middle, though I remember considering her an enemy. We've talked about it since then and she says she remembers just showing up back at school and there was a war going on, and somehow she'd gotten kicked to one side.

It was during this brief period that I was a Mean Girl. I remember purposely starting a club that only my friends could join. In fact, I can remember now precisely who was on my side in the struggle because there were 6 girls in my club, which was called All the Rage, and we all had nicknames: jeni (that's when that delightful spelling was born), rhoxi, desi, ali, chanti, and yari. We had a special way of writing our names--all lowercase, and you dotted the i with a star. I have a really cute Polaroid picture of us on the day of the school carnival. We are all smiling hysterically and we look incredibly pleased with ourselves for being such good friends. 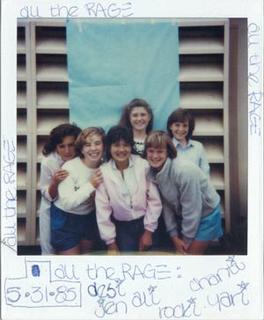 What's interesting now, though, is that when I look at that picture, I mostly think of it as "taken during the time of troubles." I look at it and I only see part of my group of friends. I'm thankful that we were able to have such a cute and fun little club, but I can't help but think that underneath our scribbled names should be a caption: "These girls hate a bunch of other girls."

Now, I can't remember exactly what went through my mind or when. I think it had something to do with our English class. We had to do "creative" book reports, which were oral presentations in front of the whole class. We got to do them in groups of our own selection, and they were really fun. (Tiffany and I once lip-synched to the song "Valley Girl," though for what book that was I can't remember anymore...but I do remember our teacher saying he thought we'd slightly stretched the interpretation of "book report.") During the time of troubles, I remember having to do my own solo book report because none of my faction members were in that class. The presentation was an interview with one of the characters in the book, and I played both roles, switching back and forth between reporter and interviewee. It may have been a decent idea, but I remember thinking how much more fun it would have been if Tiffany had been my partner. At the same time, Joy and Laura did a presentation together on flowers, and they had all these different types of roses in little individual vases. Their report was sorta bland, but I remember really wishing I could have participated even in a boring group presentation rather than my (albeit clever) solo one.

There's an entry in my diary around this time where I clearly have recognized that I don't want to carry on the war. "I miss having a big group of friends," I state, quite unambiguously. I remember talking things over with my mom, who suggested I write a letter to Joy and Laura, apologizing for the fight and asking to be friends again. I don't quite remember exactly how things shook down, but I do remember that when I moved away at the end of the school year, I counted all those girls as my best friends forever, and we stayed in touch throughout high school. Cathy and I are good friends to this day.

This was such a pivotal moment in my life. I learned that it is OK to suck it up and say you're sorry, even if you've virtually forgotten what it was you're sorry for or don't even know whether you're the one who should be sorry. I learned that sometimes even when you completely lose your pride, you gain a whole lot in return. I learned that when nobody's feelings are hurt, everyone has a better time. I learned that there is always room for more friends, and that leaving people out just makes everyone feel sorta bad. I learned that it takes way more work to exclude people than to include them. Maybe Joy and I didn't have so much in common, or maybe I thought Marlene wasn't quite on my wavelength. But it was way better to have everyone together at one gigantic, unequivocally superfun end-of-the-year pool party than to have separate factions at two smaller pool parties where you spent most of your time feeling dubiously satisfied that you've managed to keep a couple key people out and hoping your party is more fun than the other one. I learned that not being a mean girl feels wonderful.

I've kept this lesson with me all my life. And even as I get older, I find the lesson continually relevant, in family matters, adult friendships, and (perhaps most often) professional life. Tom Brokaw was so right.

yes, i think tom was right. wouldn't it be great if the world ran on this philosophy??

Yes, it's a funny quote. There's just enough truth in it to make it funny. But I don't think Tom's right in this case. Real life is so different from junior high, in so many ways. Not the least of which is my commitment to acting in a way that's so much kinder, gentler and more empathetic than my junior high self.

p.s. That is an outstanding picture!

Ann, you're very lucky if that quote doesn't apply to your real life. Oh, how it truly does apply to mine right now..... which is what drove me to write this post in the first place!